Silver’s Route To $50 And Beyond

Silver’s Route To $50 And Beyond

The Dow has been the biggest obstacle to a rise in precious metals, due to it sucking up a lot of the available value on global markets. There will be no significant silver and gold rally while we have a rallying or a “close to its high” Dow.

The Dow is up about 2.52 times from its low during the 2008/2009 crash. Based on the fact that silver has its great rallies when the Dow is weak; it is no surprise that silver’s performance during roughly the same time has not been what is expected during a bull market. Silver is only up about 1.7 times from its low in October 2008.

For silver to rise significantly from here, value will have to be diverted away from those other competing instruments, like the Dow. The Dow’s price movement during the last two weeks of August might be signaling the beginning of value diverting from debt fueled assets (like the Dow) to silver.

Sometime during the Dow’s next leg down, there is likely to be a significant silver rally, which would take silver higher than the April 2011 high. With the Dow and commodities like oil and other metals not being particularly desirable, we have perfect conditions for such a silver rally.

There are fractals (or patterns) on the silver, and Dow charts that suggest that the above scenario could happen soon. 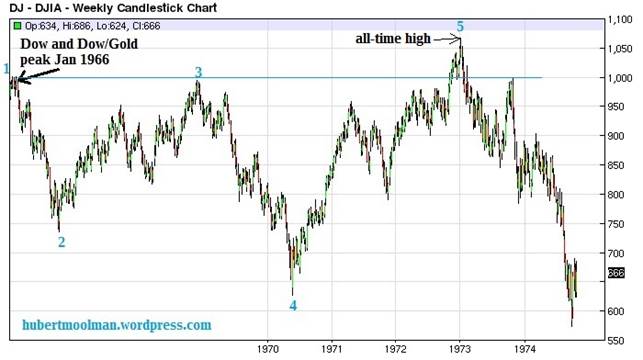 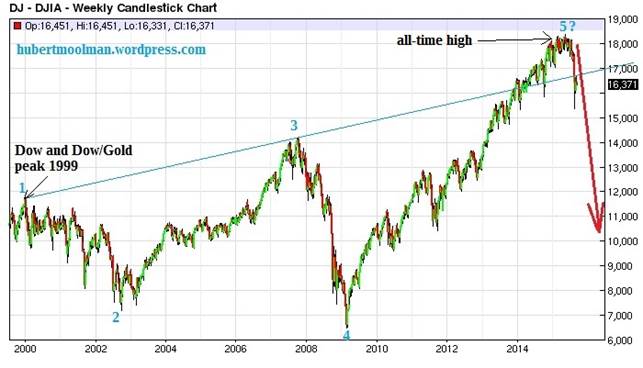 The top chart is the Dow from 1966 to 1974, and the bottom one is the Dow from 1999 to 2015. I have illustrated how these patterns are alike by marking similar points from 1 to 5. It appears that there is a very good chance that we have finally reached the peak for the Dow (point 5).

If the current pattern continues to follow the 60/70s pattern, then we would see a major decline of the Dow in the next several years. This is a good picture of the medium to short-term situation that the Dow finds itself in – right after an all-time high and just before a major decline, like in 1973.

In 1973, soon after the Dow peaked, gold and silver started a massive rally; therefore, it appears that then, the Dow was also an obstacle preventing a silver and gold rally. The silver chart since 1999 also has similarities to that of the 60/70s era.

Below, is a fractal comparison between the current period and the 60/70s, for silver (charts from barchart.com): 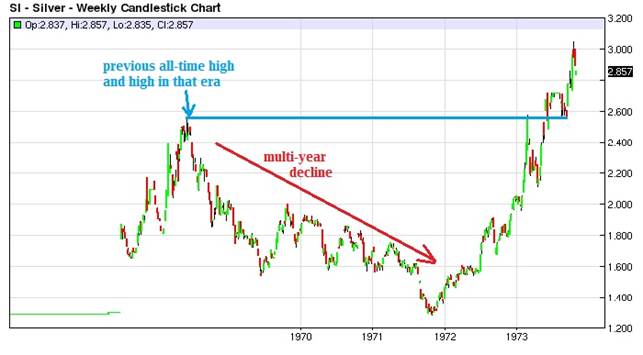 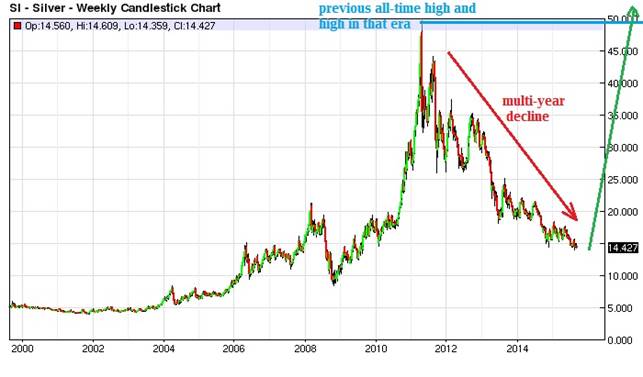 On the current silver chart, silver is still in the midst of its multi-year decline, forming a flag-type pattern. If these comparisons stay consistent, then we would see silver go higher than the all-time high (April 2011 high), within the next couple of years – provided that the Dow has made its all-time high peak.
For more of this kind of analysis on silver and gold, you are welcome to subscribe to my premium service. I have also recently completed a Long-term Silver Fractal Analysis Report .

About the Author: jewelry - diamonds- coins

Due to COVID-19, please call before coming into either location > CLICK HERE